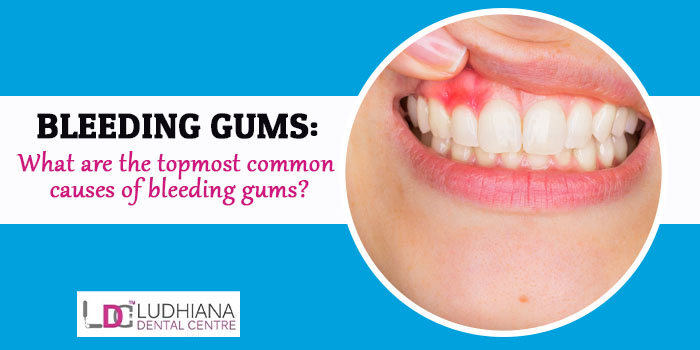 Your oral health plays an important role in managing your overall health. If you do not follow an oral care regime, then it might lead to various dental problems. One of them being the gum bleeding. Do your gums bleed? In some cases, it is triggered when you follow the wrong method to floss and brush the teeth. Or, it might be a sign that there is another health issue, which needs help right away. Let’s make you understand the causes of bleeding gums.

What are the common causes of bleeding gums?

Gingivitis is a condition that leads to bleeding gums. In medical terms, it can lead to gum inflammation. This is a mild form of gum problem and it is triggered due to plaque buildup on the gum line. Some of the signs which you will notice are:

How to treat gingivitis?

You will be able to treat the problem by following your oral care routine, religiously. Make sure you follow these things:

It is a severe stage of gingivitis, which is triggered when you do not take proper care. Due to periodontitis the bone and tissues which support the teeth are damaged. Due to this condition, the following things happen:

If the problem is not treated on time, then there are high chances that the teeth will become loose. In such conditions, you should consult the dentist right away.

Gums swelling or bleeding, might be the reason that you have a problem with Type 1 or Type 2 Diabetes. If a person has this problem, then your mouth will not be able to fight against the germs. In such cases, the person will have an increased risk of gum problems. As the person has increased sugar levels and diabetes, it makes it difficult for the body to heal on its own. Due to this, the problem is likely to get worse with time.

What you should do?

Make sure that you manage your diabetes and consult the dentist from time to time.

Leukemia is a cancer type, which can occur due to bleeding gums. Blood platelets help the body to stop bleeding. Leukemia patient’s platelet count is lower as compared to healthy patients. In such conditions, bleeding will not stop on its own which is not just with the gums but other body parts also.

When you brush the teeth, it might start bleeding. It is possible the gums will get irritated and there are high chances that you have thrombocytopenia. Due to this condition, the platelet count is low which makes it difficult to form a blood clot. Due to this bleeding increases in the gums and other body parts.

In some cases, the patient notices gum bleeding or excessive bleeding due to a small cut or you might have to undergo dental work. In such cases, the person may have a problem like von Willebrand or hemophilia disease. Due to this, the blood clot is not formed properly and there are high chances that you notice bleeding from the gums.

Vitamin is important in the body as it helps to repair and grow the tissues. Moreover, these are important to heal the wound and make the teeth & bone strong. If there is less amount of Vitamin C in the body, then you might notice the issue like:

With time, the problem is likely to increase and you notice bleeding & swelling of the gums.

Scurvy is one of the rare conditions which reduces the amount of Vitamin C in the body. In medical terms, this condition occurs due to improper nutrition. The problem can make you weak and increase the risk of anemia. Due to this condition, bleeding occurs under the skin and bleeding gums is one of the common signs.

In case, the bleeding is getting in excess, then there is an increased risk that Vitamin K is not in the right amount. Vitamin helps the blood clot to form properly and it also strengthens the bones. If Vitamin is not absorbed by the body correctly, then it will increase the risk of bleeding.

If you have noticed any of these issues, then make sure to consult the dentist right away. You should not miss out on any dental appointment to take proper care of your oral health.

How often should you change your toothbrush? How to buy a new one?How COVID-19 affect your health? What are the signs you need to know?

Some important factors that you should know about root canal

Can I undergo the root canal treatment with just one session?

Why Is It Necessary To Have A Cap After Your Root Canal Treatment?

What Is Root Canal Treatment And How Does The Dentist Conduct It?

Save Your Natural Tooth With Root Canal Therapy With Our Services